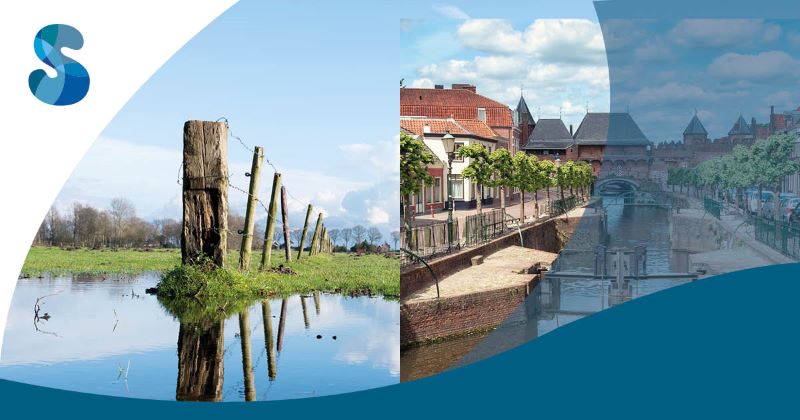 Due to climate change the City of Amersfoort (hereafter: COA), like many cities, is facing more frequently occurring periods of extreme precipitation. Due to these changing weather conditions, the city has to take action to prevent flooding. As a result when (re)developing the city, one of the key goals that the city has is to ensure that newly development areas are resilient to climate change.

However, lowering the flood risk through redevelopment existing parts of town is an objective that cannot be fulfilled on the short term as it needs careful planning. A short term solution is to reduce flood damage and subsequently flood risk. This can be done by increasing the lead time citizens have to prepare for a possible pluvial flood, as they can deploy temporary doorway dams (provided by the municipality) or move belongings accordingly in time. A lead time could be provided by a model. However, calculations take too long to satisfy the high frequency a flood alert service requires.

The Flood Alert is therefore based on a machine learning (ML) algorithm. As flooding in urban areas is a rare occasion, there are little or no observations available to train the algorithm. As an alternative, a data set can be created with a hydrodynamic model of the sewer system and a set of hypothetical precipitation events. The ML algorithm is trained with this data set and thus mimics the numerical model, but with a significantly larger calculation speed. The Flood Alert has now been deployed in two neighbourhoods in Amersfoort (see the map for the locations). It provides 6-hourly reports on forecasted flooding near sewer manholes given a precipitation forecast. The process is illustrated by the flow chart.