Serious Game gets kids to think about the urban water cycle 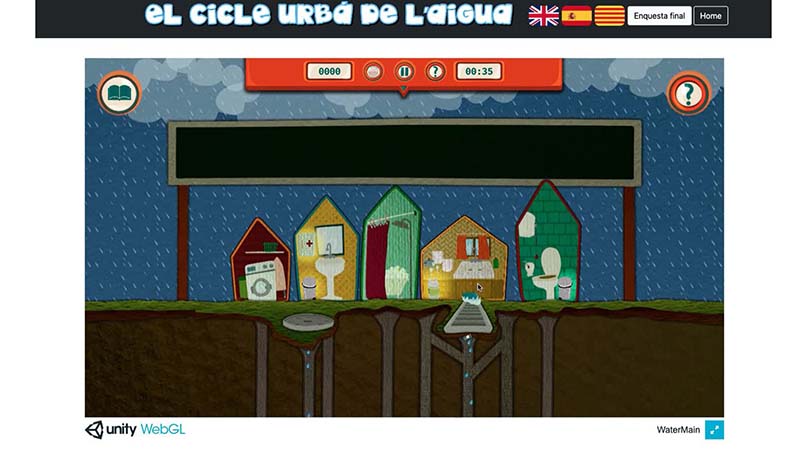 A series of minigames, collectively named the Urban Water Cycle Serious Game, teaches children between 11 and 12 all kinds of facts about the use of water. The end goal of this game is to be a reference for all educational tools on the subject. ‘As soon as the water leaves our home, we kind of forget about it’, say researchers Lluís Corominas and Xavier Garcia, from the Catalan Institute for Water Research (ICRA).

Already before joining the SCOREwater-project, the University of Girona and Institut Català de Recerca de l'Aigua (ICRA) started in 2015 with the idea for an educational game about the urban water cycle. It’s goal: to teach children how they use water, how their actions can impact the environment and what processes occur from our tap to the rivers.

The Serious Game is meant to be played by kids nearing the end of primary school, at the age of eleven and twelve. So far this year, three schools in Barcelona and one school in Girona has test-played the game. Around 130 kids have completed the game. Lluís Corominas and Xavier Garcia, researchers at the Catalan Institute for Water Research (ICRA), hope to reach even more kids in the future.

The game consists of seven minigames, representing different stages in the urban water cycle: at home, in the sewers, a wastewater treatment plant, and a river. Additionally, it includes an introductory game to learn about the types of water contaminants. At each stage, players are educated and introduced to new scientific developments to improve the water cycle.

A survey of nine questions puts kids to the test before and after playing the Serious Game. ‘On average, the kids improve by three points,' says Garcia. It shows the initial success of the game, he and Corominas think. Another promising statistic is how well the game is received by primary schools. ‘The average score that kids gave our game is 3.5 out of 5. We were told by Serious Games developers that above a score of 3 is considered good for similar kinds of games that are out there,' says Corominas.

He adds that a public organisation responsible for offering education to schools was outspokenly positive about the game. ‘We like it; it's very good,' they said. ‘I believe they want to add it to their list of what they offer to schools in Barcelona.'

‘The game has started out very slow’, explains Corominas. ‘With the help of SCOREwater, we definitely made a better version of what we came up with before. We expanded it, to incorporate the values of SCOREwater.’

In order to make the game more broadly available, Corominas and Garcia have created an instruction manual to assist teachers explaining their students the Serious Game. The short-term goals are to invite more teachers from the Barcelona region to check out the game and to provide it to their pupils.

‘We feel it can be a stand-alone’, says Corominas. ‘This product is unique, our approach is different than anything we found on the market.’ Other games on this topic do exist, set up by (for example) water utilities. However,  the core message of those games are muddled by branding, the two researchers say.

The Serious Game will soon be available on the Apple Store and Google Play. The developers are also working on in-game translations for Catalan, Spanish, English, French and Dutch. Beyond adding more languages, the Serious Game could be scaled up even more by adding more mini-games to it. Corominas has a message to all the game developers out there ‘I hope that our game will be a reference for researchers. That they might contact us with an offer to develop their own minigame that fits into the Urban Water Cycle Serious Game’