Thermal-walks help the city of Amersfoort think about ‘what cools their public space down?’ 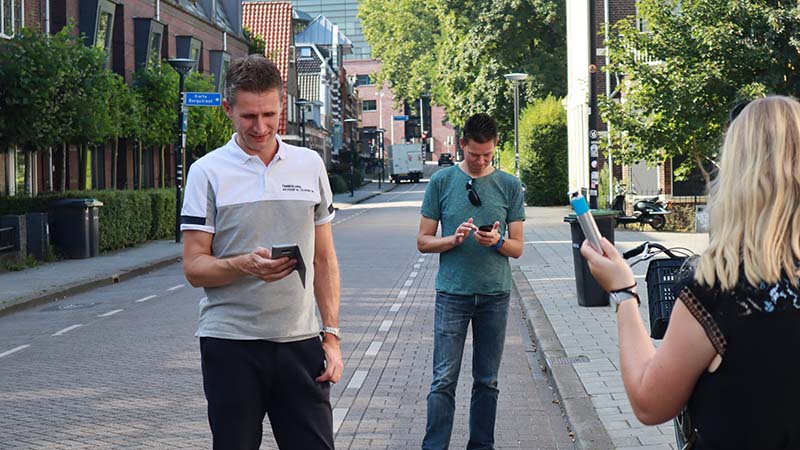 Thermal walks in the city of Amersfoort help to gather the experiences of citizens with heat stress in public spaces. Equipped with a sensor and an online survey, fifty participants thought about what choices make the most impact on cooling squares and streets. Anne Vrouwe, advisor Living Environment, shares her experience with this methodology.

‘Heat is a deadly climate phenomenon, especially small children and citizens over the age of 70 are vulnerable to its effects’, says Anne Vrouwe, advisor Living Environment for the city of Amersfoort. Despite the risks, most Dutch citizens are not shy about taking a hike with temperatures like 30 degrees or more, she adds.

To increase awareness on the subject of heat stress, for the municipality as well as her citizens, Amersfoort organized ten thermal walks for around fifty participants. There were three predefined routes. In the area around the central train station, the city center, and the residential district Schothorst. The participants walked to experience the level of heat and what factors (shade, near water, greenery) have the most impact on the experienced heat.

This methodology was applied withing the boundaries of the EU-funded SCOREwater project, which aims to make cities resilient against the effects of climate change. In the context of the thermal walks, Amersfoort invited people to pause at 14 different locations while completing a short survey on  how the temperature makes them feel. ‘It starts with acclimatizing for one minute and looking around, followed by answering the questions’, Vrouwe explains. ‘Based on how the participants answers, the city council wants to discover how to better shape it’s public space.’

The survey during the walks, contains topics that lay in the sphere of influence of the municipality, like the presence of greenery, water, and shadow. Or the proportion of pavement in contrast to trees and shrubbery. On every thermal walk a portable sensor was taken along, measuring humidity, temperature, airspeed and uv-radiation. Vrouwe: ‘Directly after the walks, we had insights in what the sensor picked up along the route.’ ‘When combining the exact sensor measurements with the survey data, we will know a lot more about the elements that have the most impact on a more resilient and more livable outdoor space’, she adds.

A lot is already known about heat stress in research, as well as possible solutions to tame it. According to Vrouwe, the thermal walks nevertheless tap into something worth doing more research on. ‘One can try to design a square or park with water or greenery, but in reality these elements could sometimes barely make an impact on how we experience it. For example: water can cool the environment, but it’s effects are way less if you walk over a bridge more than three meters above it. Or if you walk on a path five meters away from it.’

Vrouwe has high hopes that the SCOREwater-project will offer useful insights. The municipal department of Research and Statistics has delivered an evaluation on the methodology before the end of this year (The full report -in Dutch- can be downloaded here - PDF). ‘This could lead to a basis on which we can draw up new and more effective guidelines. With it we can test our current and future public space on how well they cool during heat.’

The municipality of Amersfoort is content with the response that the method has gotten. Participants were able to join the project via invitations through several municipal platforms, the project also got extra attention from national newspapers and local media. Resulting in a lot of familiar faces, Vrouwe acknowledges. ‘Many of them we know from earlier sustainability-initiatives. Or when they do a lot with climate and nature within their professions.’

The fact that some participants already have knowledge on those subjects doesn’t matter all that much, she claims. First and foremost, thermal-walks are there to create awareness. Even participants with more than average knowledge about it can be surprised by new insights. ‘Participants enrich their view on public areas and heat stress’, says Vrouwe.

The project is already something to be proud of, she mentions. ‘As a municipality we set out the three routes with a landscape architect. It showed us what it means to look at public space like our citizens on a hot day.’

The methodology is suitable for every kind of city or municipality. Heat in particular, says Vrouwe, is a topic that suits the method best. ‘In the Netherlands we don’t have standards for how cool it needs to be in places we live, like we do have with sound. By asking our citizens about their view on it, we take a first step in getting there.’

Vrouwe ends with a last advise: ‘Use easy and everyday language to explain topics like heat stress with your audience. At first we got a little lost in English phrases, now we know it’s more effective to explain it in Dutch and in our own words. That’s how you get people excited and interested in what you are asking them to find out together.’